We are so excited to have some exciting and enthusiastic talent representing Horslyx in 2015. One new face is Ashley Harrison, and here’s everything you need to know about our first new 2015 Ambassador!

“Hi, my name is Ashley Harrison and I am an event rider from Hampshire. I have just finished University gaining a 2:1 degree in Accounting and Finance at the University of Southampton and am now taking a year out to focus on my eventing. I work at the Four Seasons Hotel in Hampshire which is next door to my house and yard so doesn’t take me long to get to work, which is handy! I also teach at my pony club Staff College and Sandhurst Hunt and currently have my first horse in for schooling!” 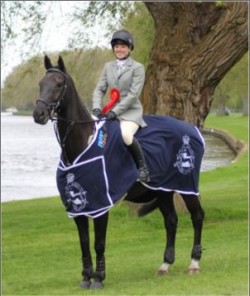 “I have 2 horses Zebedee IX and Riannon Star. Zebedee IX (Zeb) is a 16.1, 12 year old, Danish Warmblood X Thoroughbred whom I have owned for two and a half years now. We moved up to BE Novice at the end of 2014 and finished the season coming 6th in the BE Novice section at Larkhill, which was a great achievement after how 2013 ended and 2014 started. At the end of 2013 Zeb and I moved up to Novice level which didn’t quite go to plan and we both lost our confidence massively. We then spent the winter regaining our trust in each other as a partnership and went back to doing lots of polework and building the jumps up slowly. We were back on the right track in January 2014 when Zeb went crippling lame, which on investigation turned out to be bone spavins and osteoarthritis in his hocks. This was very upsetting as at only 11 he was still in his prime to be out eventing which is what he loves, and there was no guarantee he would even go back to jumping let alone eventing. We gave him all the treatment we could and within a month I was back riding him again and he felt better than ever, so we started planning our first competition and event!”

“We then had a great 2014 season gaining our confidence again at BE 100 with some great results including a 4th and 10th at BE events, 1st at pony club intermediate area dressage and qualifying for the national championships, part of the winning team in the University Challenge at Royal Windsor Horse Show, team 4th at Hickstead pony club showjumping so we decided to give novice another go as we were now feeling very confident and trusted each other again. We completed Smiths Lawn novice with a clear XC inside the time which I was absolutely thrilled about and if I had only knocked one pole in the SJ I would have been placed. So when we went to Larkhill novice I was determined to get placed because I knew I could do it and only had two poles down at Smiths Lawn because I was so nervous about the XC! And we did it we went double clear and came 6th which was a dream come true! I am really looking forward to the 2015 season and hope to compete successfully at Novice level and qualify for the new restricted novice championship and the open pony club championships.” 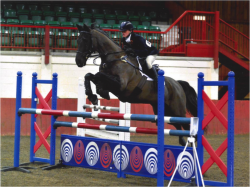 “Riannon Star (Ria) is my second horse and she is a 14.1, five year old, cob who I have owned for three months now. Ria had not done much when I got her but is willing to try anything and learns very quickly. She is doing extremely well and takes everything in her stride. We recently took her to an eventers challenge that my pony club were running and did the 75cm and 85cm – and she went double clear in both with only nine clears out of 41 competitors in the 85cm! I can’t wait to get her out and about this season eventing at all the pony club events!”

“I am absolutely thrilled to have been asked to join the Horslyx ambassador team. It is a great start to the year and it means so much to have the support from Horslyx for 2015. I am looking forward to the year ahead of me and am very excited to be working alongside such a great company. My horses are all very pleased as well as they love their Horslyx licks and are very excited to be able to try some of the different flavours that they have not tried yet!” 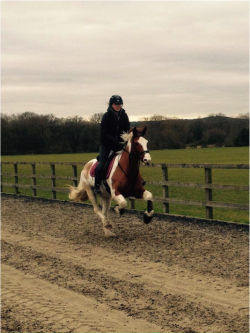