Firstly I want to thank everybody at Horslyx HQ who have sent us our supply of goodies, it couldn’t have come at a better time as “The Beast form the East” has arrived and brought things to a standstill and shut down, at least the horses have plenty to occupy them.

Luckily we’ve had a busy month so we aren’t too worried about having a few quiet days.

It was super to finally get the horses out to some competitions in February and we’ve had a very successful month, so its smiles all round. We had our first outing of the year on 4th at Reaseheath Equestrian Centre. Queen Wendy had Elfie, Percy and Florence on board. In the Prelim 18 Elfie behaved beautifully for 66.34%. Percy was first to go in Novice 24 and was pretty much impeccable for 75.21%, which was good enough for 1st place. Florence went next in the same test but having not been out for a year and a half due to having her baby, was a little bit like riding a ticking time bomb which went off in the final few movements. Up until then she’d had 7’s and 8’s but the 5’s cost dearly for 67.6% but still good enough for 5th. She will never live down letting her brother beat her at dressage!!!

Arrow had her first ever competition under saddle on the 12th at S and G Equine. I was a little bit unsure what sort of reaction I was going to get from her as she had never been ridden in an arena with other horses and only ever been ridden away from once and that was only 3 days before the competition. She was a little gobsmacked when I first asked her to go into the arena but soon settled and was actually exceptionally well behaved. She did Walk & Trot A for 71.08% and Prelim 1 for 73.15% to pick up 3rd and 5th. She was fantastic. She had never seen a dressage arena and flowers before but she just seemed to except it. Apart from one big spook in the first test, going disunited behind in the canter briefly in the second test, letting off a few whinnies and cutting the odd corner she didn’t do a lot wrong. I’m super proud of her. I think she’s going to make a super competition horse.

I must be barmy but on 24th I decided to take 4 jumping to Reaseheath Equestrian Centre, all of which hadn’t been out jumping for ages!!! They were all quite excitable but they all loved it!!!! And it doesn’t get much better then 4 double clears, 3 1st’s and a 2nd!!!! Elfie was 2nd in the 80 and Florence was 1st. Frankie was 1st in the 90 and Percy 1st in the 100. A great day!!!

And if that wasn’t barmy enough I decided to go jumping again the following day. Having jumped 3 classes on 4 different Horses yesterday and won all of them, you’d have thought I’d have had my horsey fix for the weekend…but oh no no no .So after going to a friend’s little boys Birthday Party, I flew home where I met Larissa who comes to help with the horses occasionally, who had got the horses ready to load up and off we went again. This time we had three on board and headed off to S and G Equine. Elfie jumped the Intermediate for 1st place. Florence jumped the Open for 1st place and Percy jumped the last class for 1st place. All clear, all pinging and all loving it!!! I feel so lucky to have such a lovely team of horses to ride and proud to say all those have been started from scratch by me and two of which are home bred. All in all a super month and a great promising start to the 2018 season. 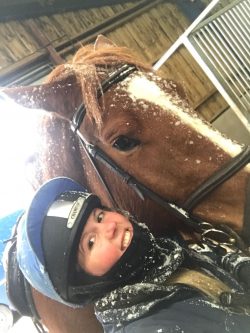